No skiing picture gallery of Mt. Cain would be complete without several pictures that show the T-bars that are used to transport skiers and snowboarders up the hill. As illustrated in picture one below, the T-bar consists of a series of large crochet style towers. The main tow rope passes over a number of pulleys on each tower, once going up hill and once coming down. Attached to the main tow rope is a series of T-bars. The T-bar that goes behind your bum is attached to a spring loaded winder by a long metal line.

The first T-bar, was invented in the 1930s by Ernest Constam, a Swiss engineer. The T-bar made it economically possible to develop ski facilities that could not support the much more expensive chair lift technology. This is certainly the case at Mt. Cain. Full day adult passes are just over $32 with all taxes included.

Picture Gallery - Top of the Bottom T-Bar - Don't miss taking that perfect skiing picture.
Click on the small pictures to enlarge them, hover to change the description. 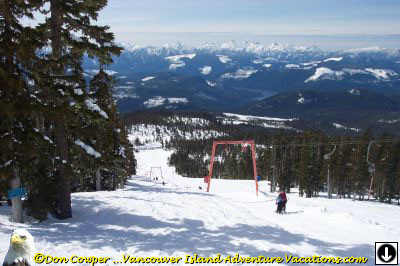 Wild Coast Vancouver Island Pictures
Above the main picture (From Left to Right)
1. This view is taken from the top of the first T-bar. Mt. Cain has two such T-bars to transport skiers and snowboarders up the hill.
2. This show shows a close up (3 time optical zoom) of the mountains shown in the first picture. It makes a very pretty skiing picture.
3. This picture shows a novice skiing starting down the run named The Face beside the lower T-bar.
4. This shot is taken at the bottom of the upper T-bar. Each T-bar consists of a metal tee with plastic coverings.
5. This shot shows the mountain that forms the east boundary of the east bowl at Mt. Cain. This is a popular out-of-bounds area. The blue sky and new snow makes this a perfect skiing picture.

Mt. Cain has two T-bars and a beginners rope tow. If you are used to sitting on high speed chair lifts these T-bars take a little bit of getting used to.

The day we visited, I noticed that the tracks were hard and a bit rutted. The mix of skies and snowboards that are hauled up the hill probably has something to do with this.

Skiers usually take the T-bar in pairs. Snowboarders normally go up one at a time. Since snowboards only have one foot attached their boards tend to be pulled up hill at an angle.

It is best if you and your partner are of similar heights. If not the bar will be two low on the taller skier and to high on the shorter one.

Getting Off the T-bar

When you and your skiing partner reach the top of the T-bar it is time to unload. Your partner should drop off the T-bar when you reach the flat unload area. You should take the T-bar in one hand and hold on to it until the metal lead has gone around the top wheel. This prevents possible injury to both riders and is easier on the T-bar equipment.

By the end of the day we were feeling muscles that we don’t normally use when skiing. Believe me when I say that these small discomforts are more than made up for by the great powder and each memorable skiing picture we were able to take.