A Snow Scene From the Top of the Billabong Run, Mt. Washington, Vancouver Island.

A 360 Degree Snow Scene From the Top of the Billabong Run, Mt. Washington, Vancouver Island

In order to enjoy each snow scene you see in this picture gallery you have to do something that lots of skiers and snowboards hate to do - hike. Mind you the hike isn't very long, five minutes maximum, but it does take quite a bit of energy especially for skiers with their heavy boots. Take your time and enjoy the view as you climb up!

When I was doing the hike I wasn't sure that it would be worth the effort. It didn't take me long to change my mind when I saw the 360 degree view from the top of the ridge! It's one of those places where a camera simply can't do a snow scene justice, especially on this day with a brilliant blue ski and puffy white clouds. These two banner pictures are composites made from five pictures each.

Picture Gallery - Beautiful Snow Scenes Top the Billabong Run.
Click on the small pictures to enlarge them, hover to change the description. 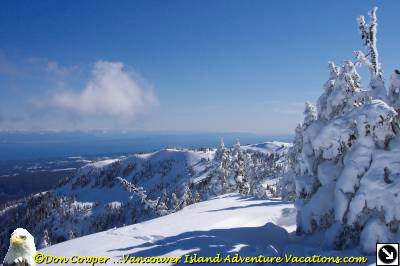 Beautiful Snow Scenes Top the Billabong Run.
Above the main picture (From Left to Right)
1. This is the view from the top of the Billabong run. This shot is taken towards the south east. The spine you see in the foreground forms the right side of the Boomerang chair ski and snowboard area.
2. This shot is taken towards the North East with the straight of Georgia and the coast mountain range in the distance. My daughter Natasha is poised to start down the Billabong run.
3. This shot shows the scene to the North West. The tracks you see in the foreground lead to the Copper run and on down the spine of the mountain.
4. This snow scene is taken towards the South West. The tallest peak towards the right of the picture is Mount Albert Edward. Hiking from Mt. Washington to Albert Edward over several days is a popular activity in the summer time.
5. This shot looks back along the trail that we hiked up to get to this peak. The main peak of Mt. Washington is shown in the left center of the picture. The red boundary sign with snow piled up around it looks like a snowman from this angle. A great snow scene.

Where To Go From Here

From here you have three choices. The first is to walk back down the trail you came up - not a good choice in my mind, but definitely an option.

The second choice is to ski or snowboard down the Billabong run to the valley bottom. My daughter really enjoyed the Billabong run. The pitch is quite steep but definitely enjoyable in good snow conditions.

You will notice is picture 2 that Natasha is wearing a helmet. In my opinion, everyone should wear a helmet. There is lots of choice these days in style and color and most are comfortable to wear. Protect you head from all those trees that don't move if you run into them!

The third choice is to continue along the spine of the ridge following the tracks shown in picture 3.

I took the latter choice. Try the Copper link from the Boomerang trail map to see each snow scene for that location further down this ridge.